It’s that time of year again! Time for the USUFans Big Blue Scholarship Fund Challenge! Our partner site USUFans.com has set up a “USUFans Challenge” to help raise funds for the Big Blue Scholarship Fund. Last year we raised nearly $28,000, and this year’s goal is to increase donations by 10% to reach $30,500. Being an Aggie sports fan has never been better, and it’s the perfect time to show you support our athletes by contributing to their scholarships! 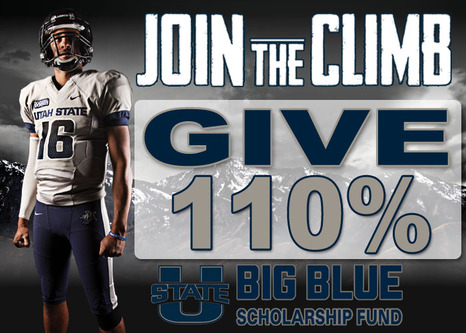 Everyone that donates will receive some Aggie memorabilia, and there are several rewards (prizes) that will be given out in a drawing at the end of the challenge to anyone who donates through the site. Interested in autographed sports cards from Aggie greats? How about a brand new piece of the Aggie Blue turf cut from the end zone in Romney Stadium? Head on over and check it out! Anyone who donates a minimum of $25 will receive a Robert Turbin, Bobby Wagner, and/or Chuck Jacobs rookie card!